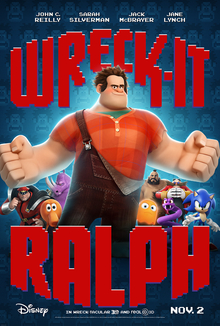 The first act is a slog. It’s very dense with exposition and jargon, getting those unfamiliar with video games familiarized. ‘Show, don’t tell’ comes to mind, and the film would be a lot tighter if there was less exposition and more action. The motives behind characters’ actions also seem ill-defined, and the stakes are low for the first two acts. The beginning of the film is filled with exposition, flashbacks, and jargon that weighs it down. The story grinds to a halt when something needs to be explained, and this happens frequently. Instead of showing through its visual medium, it speaks down to the audience (read: non-gamers) rather than conveying plot points through the animation.

The last third of the film does away with the constant exposition. That is where it truly shines: when it lets the characters stop talking and start taking action. Most of this film hinges on big reveals involving the history of these games. While the payoff and aftermath are well worth it, the film just takes way too long to set everything up

Ralph (John C. Reilly) starts off as his game’s ‘villain’, but he actually is a good person. It’s strange that the heroic characters and other minor characters think of him as a villain. Even Bowser play tennis and golf with Mario at times, so it’s unclear why everyone hates him. Yes, he is destructive, but nothing is made for his size. He’s a good character, but his motivations and goals are constantly shifting. He’s just a big guy with a lot of heart and no where to put it.

Vanellope (Sarah Silverman) is a fun character. Snarky, sarcastic, and sometimes crass. She’s certainly a newer brand of character for Disney. She has a great rapport with Ralph. Her opening up to him is sweet, and their shared outcast background gives them a unique bond despite their age gap. Her sarcasm being a guard for her vulnerability rounds her character out nicely.

Fix-It Felix (Jack McBrayer) is somewhat of a flat character. He’s plucky, nice, and quite the doormat. Felix is mostly neutral throughout the film, mostly focusing on his job and budding romance. He doesn’t really affect the plot, and would have been a good foil for Ralph if he was developed more.

Calhoun (Jane C. Lynch) is interesting, but that’s at the bare minimum. She’s an echo of hardened female war veterans, and reminds one of Metroid’s Samus Aran. Her hilariously tragic backstory and weird way with metaphor and simile keep her from being too stoic, but other than that, she’s mostly a flat character.

The Nicelanders are the starting antagonists of the film, particularly Gene. They have more personality and drive in them than Felix. Gene is actually a pretty good character, and we see his side on why Ralph doesn’t belong in the penthouse. The Racers also are pretty good characters, but they don’t get enough screen-time to justify giving them concrete personalities.

King Candy (Alan Tudyk) is one of the the best villains of the new era, and one of the best twist villains Disney has ever done. Tudyk’s Ed Wynn is flawless and his character design reads ‘good guy’, but his actions say otherwise. He tries to protect his kingdom and its subjects but really he’s an egotist through and through. He’s a more realistic villain in motive and personality with a psychotic bend.

Basically every video game character you all know and love, a few standouts being Sonic the Hedgehog (Roger Craig Smith), BOWSER!!! from Super Mario Bros. (uncredited), Clyde from Pac-Man (Kevin Deters), Q-Bert (uncredited), and a notable exception of Mario himself. The Cy-Bugs are also a cool concept, being halfway between cute and threatening, having the power to become what they eat. Sour Bill (Rich Moore) is also great, with his morose, uncaring line delivery and sparse moments of any other emotion.

A lot of the dialogue is used to get the audience up to speed on the world and characters. The exposition is endless. There is nonstop talking throughout the film with little breaks. Everyone has something to say about everything. When there are two characters in a scene, the dialogue really shines. Most of the time scenes are packed with multiple characters and it can be hard to tell what is going on. Ralph and Vanellope’s banter is written really well, and the Bad Anon meeting is a standout scene. Calhoun also has some great turns of phrase that make me laugh every time. There are a lot of points where the ‘show, don’t tell’ rule could be used to better effect.

The character models are excellent here. Every scene is stuffed with little details, Easter Eggs, and references to games. All of the character designs are on point, down to how Bowser holds his coffee. The animators had to unlearn and retrain themselves to animate the stiff, 8-Bit movements of the Nicelanders. The environments are meticulously rendered. The glitch effects and sounds are all on point and appropriate.

Henry Jackman excellently blends synths, 8-bit chiptunes, and orchestra to evoke a feeling of progress. The score is always moving the plot forward or complementing the visuals. The score brings a sense of wonder and scope to the film.

“When Can I See You Again” (Owl City) – A classic, great song, but probably chosen because of the time period. The lyrics have little to do with the film.

“Wreck-It, Wreck-It Ralph” (Buckner and Garcia) – A country rock song whose musical genre doesn’t really fit the film, but the lyrics could have been more prominent in the film, giving some great backstory.

“Celebration” (Kool and the Gang) – Another classic. Used briefly during a party scene.

“Sugar Rush” (AKB48) – A Japanese Pop Song used in an American film. I’m not surprised, but delighted. It’s really catchy and would make for a great title screen theme for the racing game, or at least for the attract mode (gameplay showed while the game is idle to attract players).

“Bug Hunt (Noisia Remix)” (Skrillex) – A drawn-out electronic dance music track. It’s catchy, but honestly not my thing, even if the beat is good.

“Shut Up and Drive” (Rihanna) – A catchy song used for a montage, but I can’t help but think that a Disney film has a song containing ‘shut up’ in it.

What used to be a quickly-paced beginning is now dragged down by exposition and setup for characters that are simple enough to understand in a sentence or two. What used to be a solid crop of characters now boils down to Ralph, Vanellope, and King Candy being standouts amongst some pretty good characters. What used to be great dialogue now is a nonstop stream of noise and explanation peppered with some great one-liners. Thankfully, the visuals haven’t changed, and still hold up very well, though the music suffers from some out-of-place modernity.

The main problem with this film is that it tries to squash a lot of material into the short runtime of a film. Wreck-It Ralph should have an animated series to completely flesh itself out. Have a video game character guest star for an episode, establish the ground rules, and develop the characters over a longer period of time. It could have been bigger and better than it was…

This film was one of my favorite Disney Films but now is squandered potential for greater things.

My OVERALL RATING for Disney’s Wreck-It Ralph is 80%.