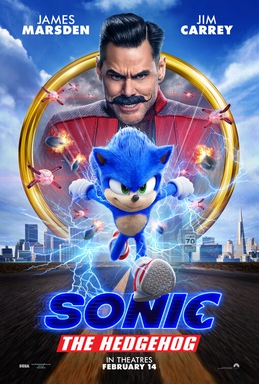 Less than a year to redesign Sonic? Gotta go fast then!

Sonic the Hedgehog is from an island across the universe. When his home is threatened, he escapes to earth using magic rings and meets Sheriff Tom Wachowski. After accidentally teleporting the rings to San Francisco, the pair take a road trip to get the rings back. It’s not easy however, as they have to contend with bar brawls, vicious robots, and the evil Doctor Robotnik, an scientist sent by the government to capture the hedgehog.

It’s pretty standard for a kid’s film, and doesn’t really wow or impress. It’s mostly a standard buddy / road trip comedy with sparse moments of action. There aren’t really many interactions between the heroes and villains, mostly focusing on the Sonic / Tom relationship. Some characters enter and exit the film without fanfare (or any real notice) and there are a few plot holes and characters missing or suddenly reappearing by the end. The final battle is straight out of the games, and the final chase, while cool, doesn’t leave that much of an impact after viewing.

We’re not here for the plot though.

The characters and events within the plot are the real gold here.

Sonic (Ben Schwartz) is great. I’m glad to see him on the big screen after his TV roles. Schwartz takes over well for Roger Craig Smith from the game, and his manic delivery and energy really sells the character. Sometimes it’s hard to not hear Jean-Ralphio or Huey Duck, but he really does an awesome job as Sonic. He’s childlike and full of wonder, and just wants to be a part of things. You really feel his wanting need for companionship as the film progresses, and his cocky exterior is just a mask of these insecurities. He also nicknames everyone around him, such as giving the villain the name “Eggman” near the end of the film.

Doctor Robotnik (Jim Carrey) is the true star of the film. Just seeing his character for the first time had me laughing out loud. Mid-film, he has a really expressive rubber-man routine that does remind more of Carrey, but it works within the context of this new film universe. His egomaniac doctor super-genius villain persona had me rolling. Every scene he came off as a huge jerk and a know-it all, and it was perfect. The film clearly explains where he’s coming from and what motivates his actions, it’s pretty well done. I do wish he had more time to talk with Sonic, he instead comes off as Tom’s antagonist.  I’m excited to see where they go with the character in a sequel though.

Agent Stone (Lee Majdoub) is Robotnik’s lackey and sycophant. He brews him coffee (with… Austrian Goat Milk??) and is a Yes Man (pun intended) through and through. He really has some great chemistry and interactions with Robotnik, and their character dynamic heightens the tension building as the doctor doles out punishment to Stone (who takes it rather well). His character disappears from the film near the end, hopefully he’s okay…

Tom (James Marsden) and the rest are just set dressing, sadly. Marsden does a good job with what he’s given, and helps sell his and Sonic’s friendship that grows throughout. He previously played another “person who meets a CGI character” in “Hop”, and I think he did better here and had more charisma. I didn’t like how his job as Sheriff (thus being lawful) never really comes up to help the plot. His deputy, Wade (Adam Pally), is mostly comedy relief, with a few line here and there. I’ll be interested if he turns up in the sequel or not.

Maddie (Tika Sumpter), is supportive of him and cares about Tom and Sonic. There isn’t much to her character, but it’s nice to see her back him up instead of arguing. Unfortunately, that roadblock goes to Rachel (Natasha Rothwell), who strangely and openly talks about wanting them to divorce (do we really need that in a kids’ film), ending with her tied to a chair. It’s all really outlandish even for a film like this. Her daughter Jojo (Melody Nosipho Niemann), is a better character, gets a special honor during her screen-time and is just adorable.

As far as side characters go, Crazy Carl (Frank C. Turner) is good and weird, with some pretty funny scenes, Vice Chairman Walters (Tom Butler) nails that B-movie actor tone and has one of the funniest scenes in the film, and while I can’t speak of a third notable cameo, I’m now chomping at the bit for more….

My CHARACTERS RATING is a 7/10. Carrey rocks the film and entertains from the get-go, Schwartz is surprisingly great as Sonic, and the human characters are fun and help move the plot along nicely, aside from the Rachel character.

When I wasn’t laughing out loud at this film, I was chuckling. The dialogue goes a mile a minute and you could tell that Ben Schwartz and Jim Carrey are both having a blast in this film. The jokes are set up where if you miss one, there’s something else visual or verbal to distract you in a minute. A lot of the dialogue does serve to move the plot along, but there are so many one-liners and little jokes that you can’t help but smile and appreciate the writing.

There is a lot of product placement in the film, and while it does feel somewhat organic, some of it feels out of place. Later on in the film, however they are clearly poking some fun at it in a tongue-in-cheek way, so I’ll give the rampant product placement a pass. Hey, they had to pay for the Sonic redesign somehow!

My DIALOGUE RATING is 8/10. Product placement and generic dialogue throughout, but Ben Schwartz and Jim Carrey’s lines and delivery help sell the film.

When the trailer for this film first arrived, we were greeted with a horrifying visage of Sonic the Hedgehog. Fan outcry actually stopped the film from being released in 2019, and they retooled Sonic’s design and now…

He looks beautiful. His body proportions are more squat and cute, his fur and quills move independently, his facial expressions are subtle and nuanced… This is Sonic! The effects team must have worked overtime because this is beautiful.

Aside from Sonic, the effects are fantastic. Explosions, lasers, and a realistic owl at the beginning all look really cool. Robotnik’s robots have great egg-like designs, as does Robotnik’s truck trailer lair, and the robots in the highway chase scene are incredibly inventive. The lightning in particular is also great in those scenes.

If I must say a negative, there were times when you could clearly tell that Sonic was not in the room. The human characters didn’t interact with him too much, and when they did, it was JUST off enough to tell he wasn’t there. Some outdoor scenes near the beginning seem green-screened to me as well.

The costuming is standard fare, regular clothing, but Robotnik’s costuming is great and I expect to see several cosplayers take on his character. Sonic also has these dingy shoes up until the third act, and they look really worn.

Standard action fare, orchestral music. It could have been remixes of the music from the games, but sadly one song makes it. Sound effects are good, and a few from the games make it into Sonic’s move set (curling into a ball, speeding faster).

My MUSIC RATING is 7/10. The music is standard. Some classic Sonic tunes would have been a welcome addition. The sound effects are pretty good.

Sonic the Hedgehog is flat-out entertaining. I didn’t expect it to be this good or this fun, and I was pleasantly surprised. The effects are very good, the acting from Schwartz and Carrey is fantastic, and the dialogue is deceptively clever, with jokes for kids and adults alike. The plot is pretty rote, however, and the music is somewhat standard with very few hints to the original source material.

You gotta go fast and see this film before it speeds out of theaters. My OVERALL RATING for Sonic the Hedgehog is 74/100.