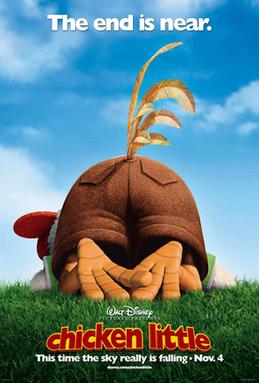 The Little Chicken that could…

Chicken Little has two distinct halves that against all odds, make a cohesive whole. The first half of the film is a coming-of-age redemption story with the successes and failures of the title character in his life. When that story ends on success, the film shifts to an alien invasion plot that improves upon the original tale in an interesting way that, while it doesn’t land perfectly, still manages to stay on its feet. The plot is often interrupted by non sequitur jokes and pop culture references that, at times, can be grating, but they smooth out by the middle of the film, and by the end become endearing callbacks.

Criticism of the film points to the hatred characters display towards Chicken Little, but it works towards the story in that he’s not too effected by others’ opinions and his resourcefulness and friendship help win the day rather than appealing to the entire town. It’s not a huge plot point, and it dies at the final act, but it’s still warranted and important for the protagonist’s character growth.

My big complaint is the film moves too quick from act two to three. It needs more time to breathe and grow the characters just a bit more. This time would have strengthened some sudden character developments in the final act, and helped the film become more cohesive and less rushed.

Chicken Little (Zach Braff) is our tiny protagonist. I love his ingenuity, how he uses common objects around him to literally ascent to higher heights. He is somewhat of a wallflower and doesn’t really fit in with most of his classmates, but he makes up for it with his intelligence, willpower, and sheer doggedness. He’s a different kind of protagonist from recent films in that he has bad luck but has the smarts to know how to get out of it, and it’s fun to watch him make up for his stature with gadgetry and physics. He is shy and somewhat timid around others, but he seems pretty cool around his friends, providing a nice contrast. He does seem to get a sudden all-around character boost at the final act, and while jarring, fits with his character. When he’s in the spotlight, he’s flustered, but when obscured by chaos, he’s a genius.

Buck Cluck (Garry Marshall) is a source of ire among the Chicken Little fandom. Everyone says he’s a bad father in the film, and somehow, I don’t think he’s that bad a father… He just has no idea what he’s doing and how to raise a child, even mentioning it to a photo of his late wife. Taking this into account, he may have been the center of attention when his wife passed, and doesn’t want that same pity on his son, but this is all speculation on my part. While I do feel like they were trying to make him more sympathetic, he does come around to trusting his son and helping out at the end.

Chicken Little’s Friends sadly, are pretty much stock characters, but their personalities shine through:

Abby Mallard (Joan Cusack) is the ‘plucky girl who is eventually the love interest’ driving force character. She gives Chicken Little confidence where he has none and compliments him well. She is a pretty good friend to Little and crew, and is the brains of the outfit, planning the next step alongside Chicken Little. When she becomes the love interest in the third act, it’s a truly funny send-up of the cartoonish swooning woman that goes so over-the-top but doesn’t lose that helpful streak one bit.

Runt of the Litter (Steve Zahn) is the ‘main character but worse’ here. He’s pretty shy, picked on by others to an absurdly mean degree, but doesn’t lose his passions or gusto for song. He’s also somewhat of a hypochondriac to a degree, carrying a paper bag around to breathe through. Like Chicken Little, he does grow a backbone near the end of the film and helps save the day.

Fish Out of Water (Dan Molina) is the ‘strange foreigner wild card’ character that never fails to make me laugh. He doesn’t speak, except in garbled bubble talk through a diving helmet, but his actions speak louder than his words. He mimes everything, and this leads to some great sight gags and references that are easier to stomach than the song and film references. He’s also strangely adorable and probably would be fun to hang out with.

There are a lot of other characters in the film, such as classmates, townspeople, and others that are notable:

Foxy Loxy (Amy Sedaris) is the rival and bully, notably a female adversary. There is some controversy about her change in behavior after the film’s climax, and while it’s played for fun, it’s still disturbing.

Turkey Lurkey (Don Knotts, in one of his last few voice roles) is a hilarious character who is just trying to be mayor of the town, Yes, he does get sidetracked and flustered, but he does have the town’s best interests at heart. The best part about him though, is the government official dogs near him whenever he’s in public, showing him cue cards on what to do (‘smile’, ‘wave’, ‘check zipper’), reflecting on how politicians and celebrities need to act in the limelight. It’s a great tongue-and-cheek joke about show business that helps enhance the character and the film.

The Aliens (Melvin – Fred Willard, Tina – Catherine O’Hara, Kirby – Sean Elmore, Evan Dunn, Matthew Josten, Alien Cop – Patrick Warburton) are prominent in the second half of the film, and the mostly mentionable thing about them is their designs. The ship is a large alien saucer vessel while the scouts are mostly squid-like, and the actual aliens are similar to troll dolls and Furby. It’s an interesting combination, but somehow it works.

Also, Morkubine Porcupine (Mark Dindal), who only says single words (‘woah’, ‘no’, and ‘yo’. That’s it.) and wears sunglasses, but that doesn’t stop him from being the coolest character in the film.

Adam West also makes a cameo that I dare not spoil, but it’s truly great, and the celebrity casting in general is spot-on and nostalgic.

The dialogue here is relaxed and snappy, similar to The Emperor’s New Groove before it (same director here), and the characters come together so well. The dialogue is evenly paced in the slow scenes, and it ramps up as things get frenetic, with joke-a-second comedy and short sight gags. The script is pretty tight during the jokey moments, but it loses some steam when the film slows down. The jokes and action seem to overtake the slower points of the film, but when it wants to, the film nails those slower points.

Being Disney’s second CG Animated film, there are a lot of rough edges here. The environments don’t really pop, but the character designs are good, and the smaller effects shine here. Transparency, light, and water are done well here, and texturing is pretty good too. Some live action compositing for a short joke is well done too, and the characters and their emotions are clear on the screen, night or day. This is a film that really tries to hit the mark, and for the most part, it does.

The orchestral soundtrack with choir really works with the film, but it also delves into using more folksy instruments for some scenes. It isn’t really that noticeable in some portions because it fits so well, and the alien theme is also cool and mechanical, contrasting in a good way. A very good instrumental soundtrack for the film.

“Stir It Up” (Patti Labelle & Joss Stone) – A catchy motivational song with a hip-hop / gospel fusion that turns out better than it sounds.

“One Little Slip” (Barenaked Ladies) – A great song that epitomizes this movie’s themes of never giving up even though the world seems to be against you. A nice blend of rock and background vocals.

“Shake a Tail Feather” (The Cheetah Girls) – Sung during the credits. A good catchy song that ties into the animal theme, and blends horns with heavy percussion.

“All I Know” (Five For Fighting) – A slow, piano-heavy song with horns about the let-downs in a relationship. Very somber and very well done.

“It’s the End of the World as We Know It” (R.E.M.) – Mostly used for the chorus, the whole song is fast-paced and fun to listen to.

“Ain’t No Mountain High Enough” (Diana Ross) – Used late in the film as a triumphant piece when the hero wins, but also in the context of ‘this film couldn’t be weirder’ when seen.

“We are the Champions” (Queen), “Wannabe” (Spice Girls), “Don’t Go Breaking My Heart” (Elton John, Kiki Dee), “Stayin’ Alive” (written by the Bee Gees), “I Will Survive” (written by Freddie Perren and Dino Fekaris) – All songs sung by characters during the film or in the credits, but the last two are recurring as mantras for Runt of the Litter, and they have that ‘friends singing their favorite songs together’ feeling. It’s cute and tongue-in-cheek.

Chicken Little is a film that doesn’t get enough credit. It tries so hard to be different and stand out, that it has become reviled. The hateful, hurtful characters within are all misunderstood people, and in a strange way, this film has become its story: an underdog hated by the populace tries and fails to succeed. This also echoes Disney itself at the time, releasing films that were abject failures at the time, ones that didn’t resonate with the general audiences at the time.

But with failure comes success. Chicken Little is a step in the right direction for the studio, much better than what came previously (Home on the Range, Atlantis, Brother Bear) and the studio can only go up from here (and boy do they skyrocket). I remember watching this in the theater and loving it. The strange character designs, story, sense of humor, and pop-culture-laden dialogue struck a chord with me. This film stuck with me rather than repulsing me, and in a way, I felt like Chicken Little at the time, having a strange misfit group of friends and dealing with a strange world that didn’t seem to fit my unique brand of creativity.

Chicken Little may not have the best effects (almost Playstation 2 graphics), or plot (if only there was more time given…) but the dialogue (references aside), characters (seriously fun and funny), and music (it grows on you) are all solid.

Chicken Little swings for the fences and hits them, but doesn’t get a home run.

At the very least it tried… It tried. 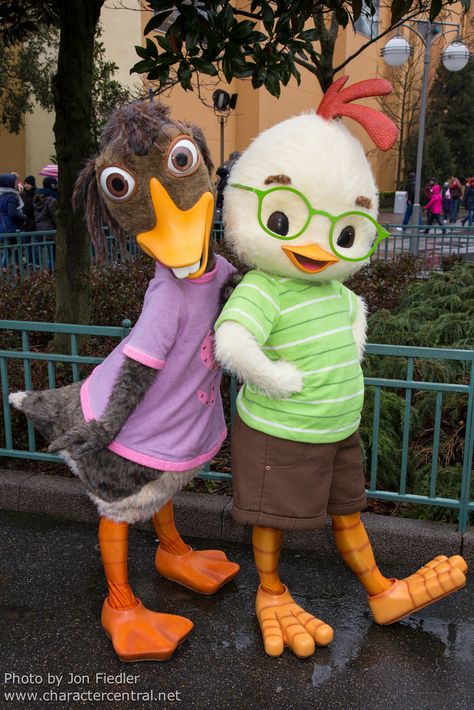 My OVERALL RATING for Disney’s Chicken Little is 84%.

Next time, we visit the future and meet a certain family…