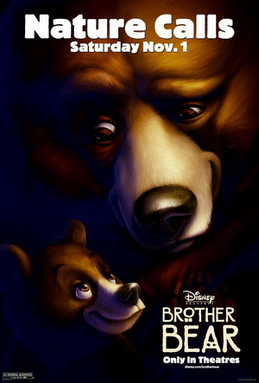 The plot of this film is yet another ‘journey to the end’ film, where the stage is set, the journey is made, and lessons are learned. There are a lot of cliche plot points in this film, like it has a series of boxes to check. There is a second act ‘twist’ that can be discovered earlier in the film, leading to the over-used ‘liar revealed’ plot that is a boring ticking time-bomb. The resolution to the twist isn’t even shown in dialogue, but in the middle of a song, thus losing its impact. The rest of the film is a series of events that happen from Point A to Point B: characters are met and forgotten, and locations come and go, and the only suspense is the appearance of a character hunting the protagonist. The lesson of moving on from revenge and telling the truth are good, as are the first few minutes of the film or so, but at this point, it’s rote.

Kenai (Joaquin Phoenix) is the typical protagonist that gains responsibility throughout the film. He learns to tolerate Kovu and become more responsible for his actions. His story is about learning to embrace his more caring, nurturing side, and while that is nice, it doesn’t ring true throughout the film, feeling like a series of boxes to check.

Koda (Jeremy Suarez) is a bit more nuanced than Kenai. He has more emotion and drive, and has a few funny lines and witty points to him. You can feel the emotion when he is betrayed, and the happiness provided in the performance.

Denahi (Jason Raize, Harold Gould) is the hunter antagonist, driven by revenge. That’s basically it, but at points, his failures are inspired. The emotions he goes through between rage, frustration, and guilt are all done very well. He has elements of dramatic irony in that he is hunting his own transformed brother, but that’s about it.

Rutt (Rick Moranis) and Tuke (Dave Thomas) are the comedy relief pair. They’re basically Canadian, say ‘eh’ a lot, and are very annoying. On a personal note I only tolerate them because half of them is Rick Moranis, and I miss him. There’s maybe a joke or two that are funny, but they’re ultimately unneeded.

Other minor characters include the wise elder Tanana (Joan Copeland) who provides exposition throughout, a group of bears (Michael Clarke Duncan and others) that provide comedic relief and fun, and the two Rams (Paul Christie and Danny Mastrogiorgio) that fight with their echos from when we first see them until the end of the film. One of the only good and memorable jokes in the film.

The dialogue here is good, and does its job. It’s modernized and kind of funny, but no lines are memorable, and it doesn’t leave much impact. The line deliveries are good, but the jokes don’t really land and characters are more annoying than endearing.

The backgrounds here are beautiful, and the lighting is on point. The character animation is also good, and they has a good grasp of physics and weight. Scenes featuring the northern lights in the sky, and the animals within them, are beautifully done, and worth watching.

The music is majestic, tribal, and well done. Phil Collins returns for another Disney film, and while this is not as great as Tarzan, it still works here, yet is less memorable. The score is also filled with tribal beats, choirs, and orchestral sound that heightens the scenes they’re in.

“Look Through My Eyes” – A nice Collins rock ballad that builds and plateaus, needing an end rather than constant repetition. Nice use of piano and unconventional instruments though.

“Great Spirits” – An uplifting song sung by Tina Turner that solidifies the core meaning of the film. Done very well.

“Welcome” – A relaxing song introducing the other bears and solidifying the moral of family. Preachy and similar to the rest. The soundtrack version with The Blind Boys of Alabama is better and more full of life than the sole Phil Collins version.

“No Way Out” – A sad song by Collins played during the twist reveal. It’s okay, but just hammers home the themes shown on screen in an obvious way. There are two versions of this song, one with piano, and another with synths, and they’re both equally okay and interchangeable.

“Transformation” – Sung by the Bulgarian Women’s Choir, this beautiful song is full of wonder and majesty. Truly great. The Phil Collins soundtrack version is too on-the-nose and a little less majestic.

“On My Way” – A nice travel ballad, initially sung by Jeremy Suarez then later taken over by Collins, is one of the better Collins songs in the soundtrack. Bouncy, fun, and nice, this works great as a travel montage song or something for walking.

Brother Bear is forgettable. I only remember it in passing, and mostly because of the gorgeous artwork and character animation, and the glut of trailers and promotions left in this film’s wake. Most of it involved the moose, and their incessant jokes, and while I probably laughed as a child, I’m left bored as an adult. This film, for all it’s marketing and effort, is sadly, boring. Sure, there are a few lessons to take away from the story but the gaps of time spent traveling or telling lame jokes sours those messages, and the plot is standard fluff and distractions until the talking points come about.

The characters range from obnoxious to bland, and no one really stands out amongst them as a well done character, they’re all just the same or similar. The dialogue is modern, and aside from some minor characters and the moose, no one really acts outside of their normal voices, or at least, no character dialogue here is memorable. The music falls flat in places, and after hearing the great Phil Collins tracks of Tarzan before, Collins’ Brother Bear output is same-y and bland. The score and other songs are pretty good though, and work well in the film, but aren’t worth seeking out on their own all the same.

Brother Bear may be about ‘brothers all the same’. but does that have to apply to the rote plot, characters, and music?

My OVERALL RATING for Brother Bear is 60%.

Moo. That’s it. I’ve got nothing to say.