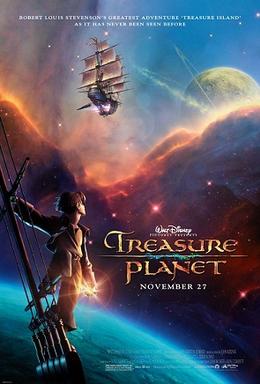 The plot closely follows the Robert Louis Stevenson Treasure Planet novel and adds a science-fiction twist. The plot is full of intrigue and with every question answered, more questions appear. The first half of the plot contains the journey, and the latter half the destination, rather than spending too much time on one or the other like Atlantis did. The pacing is done really well here, and character motives are set up and paid off in a timely fashion, and nothing is lingered on for too long. All characters are given times to shine, and plot points revolve both around the places visited as well as the characters that inhabit them, in a way that neither loses focus.

The third act takes a tonal shift to comedy somewhat and struggles to get back to the original adventurous feel, but the first two acts are very well done.

Jim Hawkins (Joseph Gordon-Levitt) is our brooding protagonist. He does this for a solid 90% of the film, and while he has glimpses of character near the end, he acts as more of a surrogate character for the audience, lacking a strong personality. Even the most minor of characters exude personality, and while I understand the story and character reasons why he broods, he is not that compelling of a character, acting as the straight man to the antics around him.

Silver (Brian Murray) is probably one of the more complex Disney characters put to screen. Throughout the film it is put into question whether he is hero or villain, when the morality of the film is more grey than most realize. Silver shifts from ‘hero’ to ‘villain’ when in reality, he’s a hero to only himself, and a villain to those that don’t help him achieve his goals. He is a user to all, only interacting with people to meet his own ends. Yet… He sees Jim’s potential, and does try to unlock it over the course of the film. He at least tries to make Jim a better man than he will ever be. While he technically is a Disney Villain, his character is so much more than that label.

Doppler (David Hyde Pierce) is the comic relief character for the first half of the film. He plays the expository science role in the first half, but in the second, he plays protector for another character and actually grows. He was initially scared, but now he is prepared. Also, the inflections that David Hyde Pierce puts on the dialogue is fantastic.

Captain Amelia (Emma Thompson) is the lone main female on the crew, and the captain as well, to boot! She is a favorite of many, and actually a great character. She is stern, collected, and thinks miles ahead of the other characters, yet she does not shut down input. She isn’t really cocky, but is directly correct in many of her assumptions and orders she gives. She isn’t really eccentric, but is incredibly prepared. She defies previous stereotyped characters and gender conventions, and paves the way for more similar characters.

Her second-in-command, Mr. Arrow (Roscoe Lee Brown) is more no-nonsense than the captain, and basically serves to whip the men into shape when she cannot. He has a really cool design of a rock-man in an admiral’s uniform, voice, and some humorous moments, but isn’t in the film all that much.

Scroop (Michael Wincott) can be described as the de facto villain of the film, and similar to Mr. Arrow, his design is cool, like a mix of a spider, a crab, and a scorpion, and his voice is deep and breathy. He does not appear in the film that much as well, and serves as an obstacle for most other characters.

B.E.N. (Martin Short) … SIGH … Let’s talk about him… Martin Short is decidedly not my favorite actor of all time. Most roles I’ve seen him in cast him as the constantly annoying kind of guy, and it grates on me.

So imagine my surprise when I got used to it. Yeah, I’m shocked too.

Disney really picked the right cast for this film. Even Martin Short can play a malfunctioning robot well. and a few layers of effects and intentional vocal glitches really help sell the character. Sure, he has a few lines that are yelled at maximum volume, but it works well for a character intended to be trapped on a planet for decades.

Other minor characters include Jim’s mother, Sarah, (who I was surprised to learn didn’t die after her introductory scene) the owner and proprietor of her own bar, and a loving and caring mother as well, the robot police whose comedy just doesn’t land, a host of weird crewmembers including the fart-noise alien Snuff, who speaks Flatula, and gets a lot of weird jokes and interjections during the first two acts, and Morph (Dane Davis), the pink blob that can transform into anything, but mostly serves as a plot device, no matter how cute he may be.

The dialogue is quick, choppy, and doesn’t really get drawn out. Words are efficient here, and used when needed. What doesn’t get shown gets explained, and what doesn’t get explained gets shown, and that economy is great here. There are a few throwaway lines here and there, but they are very sparse, and a lot of the jokes land nicely, even from an adult perspective. The dialogue also helps to create mystery in the first half of the film, and provide exposition in the second. Very well done.

Some of the most beautiful blending of CGI (computer-generated imagery) and traditional  (hand-drawn) animation that Disney has done. Silver’s mechanical portions are done with CGI, and it’s really hard to tell sometimes where the hand-drawn ends and where the CGI begins. The locales and backgrounds are also teeming with life or with color in some cases, and the camera angles and movements throughout these locations create a great sense of scope and depth. That being said, the CGI and hand-drawn integration are not totally seamless at points, but it doesn’t stop the animators from trying.

The lack of lyrical songs really helps the plot here, allowing for more moments for the excellent score to shine, and exposition to be given. James Newton Howard gives the film and many scenes their own distinct themes, and backs a lot of heartfelt scenes with beautiful swells, action scenes with electronic beats, and a very memorable main theme.

I’m Still Here (John Rzeznik) – A very good song for its time, but dates the film to the angsty teenagers of the early 2000’s. The rock guitar seems out of place in the middle of a film that has mostly used an orchestral score, but it does call back to the first ‘solar surfing’ scene.

Always Know Where You Are (John Rzeznik – Film, Bbmak – Soundtrack) – While this has some of the same dating issues as the previous song, it works better here over the credits. The film version is also more heartfelt and has better instrumentation than the soundtrack version as well.

This film was a box office flop, enough to kill Disney’s hand-drawn animation division, and I totally get why in hindsight. The plot, while strong initially, falls apart near the third act and the intrigue is gone, replaced with a survival story, the characters are great, yet suffer from having way too many of them to fit into a short runtime. Everyone, albeit briefly, gets their chances to shine. The dialogue is very well done, the inflections are spot-on, and while some jokes may not land, it’s solid writing, and the effects are jaw-dropping and fantastic, though the CGI and hand-drawn animation are just about there. The music is really well done and memorable, but the rock songs drag it down.

A key word here would be almost. Every category almost makes it. This film is way better than I initially thought it would be, and it is almost great. I really appreciate the effort put in by all, and it makes for a really good film. No one issue can fix it, but the film doesn’t have to be redone from the ground up. Clean up the third act, cut some extraneous minor characters and buff the protagonist, drop a few jokes, blend the CGI, and delete the rock songs, and maybe, just maybe, this film would be beloved by a generation.

Treasure Planet, where almost set an animation style to flames. 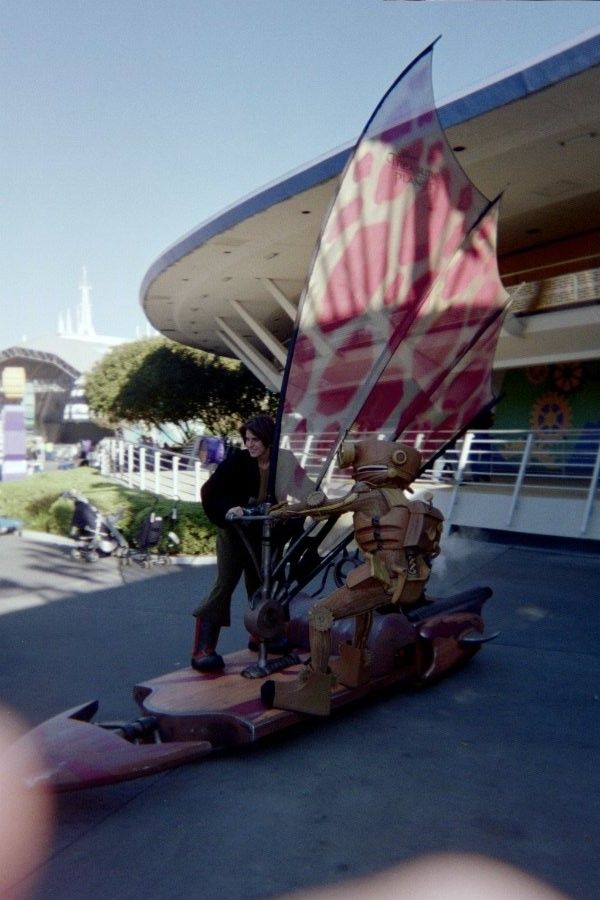 My OVERALL RATING for Disney’s Treasure Planet is 82%.

That can only mean one thing…