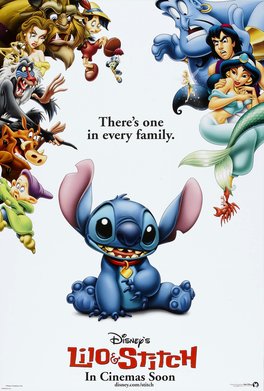 We all need a little ohana now…

The plot of Lilo and Stitch is a mixed bag of not knowing who your demographic is. The numerous children of the 90’s were growing up, and needed edgier content, like sci-fi. The rest of the younger kids and parents needed humorous, fun jokes and a family core. Disney made this work, but just barely. There is a 70-30 split between the family-drama and science-fiction portions of the film, and when the film focuses on one of these aspects at a time, it balances out well, but when combined as seen at the end of the film, focus is muddled, if not lost. While I do somewhat appreciate the opening 10-minute expository scene at the start of the film, the opening title sequence on Earth can be used as the start, and that lengthy prologue can easily be explained away in a few short sentences. As for the plot itself, it is a “coming-of-age / ugly duckling (actually called-out in-story) / family means everything” story that works well, and tried-and-true for Disney, with a few elements that hint at Disney’s more mature side.

Something this film makes is an argument for is that no relationship or family is without some chaos, and that families can survive that chaos on their own most of the time. There is a theme of interference by others in this film, whether it be by governmental influences (Bubbles to Nani and Lilo, The Galactic Federation to Stitch) or familial influences (Nani to Lilo at times, Jumba to Stitch), and instead of the constant pressure given by the formers to the latter, an honest conversation should be opened, as seen at the later points of the film, instead of the intimidation tactics and nose-to-the-grindstone mentality of said formers. Let people be people. We’re all smarter than you think, even children. They’re the ones watching these films and gaining lessons from them.

Stitch (Chris Sanders) has an interesting back story. Around the time of the film’s release, Disney was going to lose the copyright for Mickey Mouse in the late 1990’s and they needed a replacement. Chris Sanders happened to option the Stitch character for a children’s book in 1985, and Disney wanted the character. Stitch would have been the new mascot, and Mickey would probably be moved to the background. Obviously, this did not happen as of 2020, however, the copyright does expire for the Steamboat Willie version in 2024. Stitch, however, is a merchandise cash cow, with a multitude of shirts, plushes, toys, and art still available and evergreen.

As for Stitch himself, his design is equally cute and creepy. He can switch from four limbs to six limbs with spinal spikes, and his eyes and teeth can go from playful to scary in seconds. His character is a great example of “nature versus nurture” where eventually, nurture can overcome nature, according to the film. The voice is also very cute and easily imitable, and while it does remind of Gurgi from The Black Cauldron, the voice fits Stitch perfectly (he is voiced by the director after all).

Lilo (Daveigh Chase) is one of Disney’s most fleshed out protagonists. She has a rich backstory that, while implied, is deeper than most. She is an orphan, raised by her sister, ostracized by her peers, and acts out using her imagination as a means to cope with the trauma and her rapidly changing situation. For example, she believes a fish controls the weather, so she feeds it every day in hopes that the storm that killed her parents will not happen again. She creates her own freakish doll called ‘Scrump’ for a companion while the other kids have generic store-bought dolls, and adopts the only animal in the shelter (seemingly) even though it displays human-like intelligence, is blue, can walk on its hind legs, and talk.

Lilo also believes in the powers of prayer (last we saw someone pray was in Snow White), creativity, hope, perseverance, love, and above all, family (ohana, as stated above). All of these traits make her a unique protagonist to the canon. It’s one of the few times where a young girl takes center stage, and Lilo holds her own very well here. She is patient with Stitch, and slowly trains him to be less destructive and more kind. She fights with her sister, yet loves her all the same. Chase also does a fantastic job at conveying Lilo’s emotions through speech alone.

Nani (Tia Carrere) is Lilo’s sister. She, like Lilo, expands and breaks the mold for Disney’s female characters. On one hand, she seriously tries hard to raise Lilo. She is pulling double-duty as both a sister and a mother, gaining employment and increasingly becoming frustrated with her sister’s quirks at the same time. There is a distinct love-hate relationship between them that is endearing and humorous. While she doesn’t share much screentime with Stitch proper, she mostly sees him as something to keep Lilo preoccupied and to help her learn how to behave and take care of something. It’s an interesting parallel from Nani to Lilo to Stitch, with the formers’ trying to reign in the latters’ chaos.

Nani’s boyfriend David (Jason Scott Lee) is a good character, and actually a caring boyfriend who tries to improve her life. He respects her boundaries of her family, and doesn’t interfere that much, though he gets Nani a job near the end of the film, and actually seems like a pretty okay guy.

Cobra Bubbles (Ving Rhames) is one of the more memorable human characters here. He’s funny in that he’s deadpan and serious a good 90% of the time, yet he represents the stark reality that Lilo is constantly this close to being taken away from Nani. He’s not a villain, and not really an antagonist, but he is one of the most real characters in the film, and helps ground it in a way that none of the other characters could.

Dr. Jumba Jookiba (David Ogden Stiers) is a fun character here. He bounces between evil scientist, genuine threat, and soft-hearted big guy from scene to scene, but like Bubbles to Lilo and Nani, he is a constant reminder to Stitch that the good times can come to an end soon. He does have the elements of a well-rounded character, but the constant shifting of alliances doesn’t really make him as rounded of a character as his body shape is.

Pleakley (Kevin McDonald), on the other hand, is a better character than his alien companion. He’s a stickler for the rules, and proud of it. He is fascinated by the customs and life on Earth (to the point of wearing women’s clothing in the film and TV series, also as an homage to M*A*S*H‘s Klinger) and seems to truly like it there, as opposed to Jumba, who is more obsessed with Stitch and his capture. He is empathetic, and consoles others when they’re down, and while he works for ‘the villains’, he really isn’t one, he’s just doing his job, and actually understands that point. He monitors, but doesn’t actively involve himself (similar to Star Trek‘s Prime Directive), and that takes more restraint than most characters give in this film.

Captain Gantuu (Kevin Michael Richardson) is the actual villain of the film. He doesn’t have much of a personality aside from being huge and intimidating, and again, is just someone doing his job, unaware that Stitch is actively being rehabilitated. He definitely acts ‘evil’, but otherwise, he has to be in this film as someone worse than Jumba and Pleakley so we’ll come around to them faster.

As far as more minor characters go, this cast is pretty lean, merely serving the main characters’ growth instead of existing on their own. The Grand Councilwoman (Zoe Caldwell) is well-meaning and actually cares about life, thinking that Earth is a Mosquito Wildlife Reserve, and the rest of the humans and aliens are all mostly minor characters, but server their roles well. The Man with the Ice Cream (Frank Welker) cannot catch a break though. Poor guy.

The dialogue wonderful here. Lines here move in a rhythm with the action, and convey great emotion and humor. A lot of the quotes are memorable, and the one-liners and heartfelt moments are just great. The voice cast really had fun with their roles, and the voices are distinct and have great inflection.

The effects truly shine here. Beautiful watercolor backgrounds focus on the brilliant greens, earthy reds, and vibrant blues of Hawaii, and the unique character designs by Chris Sanders (pulling triple duty as director, voice actor, and character designer) make this film unique among the canon but still fitting in. While there are some cartoony designs that show Disney more than Sanders (Jumba and Pleakley’s design, some explosion effects here and there), this film unmistakably has his thumbprint.

The score isn’t that memorable here, and the combination of Hawaiian and Space Adventure music clashes thematically. The original lyrical songs and Elvis Presley music really hits though.

He Mele No Lilo – A great opening song. Introspective and fun all at the same time, and it gets better as it goes along.

“Hawaiian Rollercoaster Ride” – I’ve had this on loop while reviewing this film. Fantastic and really gets going after the intro. Incredibly catchy.

Lilo and Stitch is a wonderful film. It has some great animation and music, with very good characters and dialogue, and a somewhat muddled story trying to please two diverse crowds, but what it excels at is the takeaway messages and abundance of heart. While this may not be the best of the Disney Animated Canon, it certainly is one of the most unique and memorable, with a beautiful look, sound, and feel. It teaches the importance of not giving up on family when things seem at their most broken. Rather, like Lilo’s doll Scrump, make the best use of what good there is around you, and never lose or give up on that, for any love given or received is good.

And that is the most important lesson of all.

“Ohana means family. Family means nobody gets left behind or forgotten.” 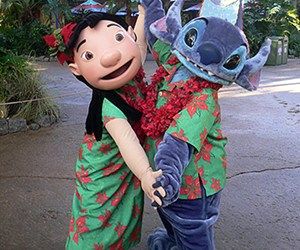 My OVERALL RATING for Disney’s Lilo and Stitch is 86%.

ANOTHER Space and Earth film!

(Fun Fact: I wrote this while in Hawaii!)