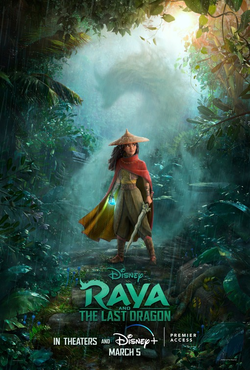 Should you put your trust in this film?

The beginning of the film shows great promise, with a little bit of self-awareness and modernity. It quickly falls apart, however, once the main journey starts. The film falls into a formula of collecting gems in different towns that feel like they are crafted for the plot instead of organically designed. Several narrative devices are used from other Disney films, and others even called out to the audience through narration or a joke. Other moments seem manufactured for drama, and draw out the inevitable instead of respecting the audience’s time. This is a film that is desperate to be original, but really is just another formulaic fetch-quest across the map. I will say that the first and last half-hours are mostly good though.

The lessons and morals of the film are both obvious and subtle. The ‘trust’ theme is drilled into the audience throughout, yet by the end, it really isn’t explained how it solves the plot. It also isn’t really a great lesson to begin with (especially for children), as the climax relies on blind trust to a character that hasn’t deserved it at all. The true lesson should be forgiveness instead of trust, both asking for and giving. While there is a scene that tries to clear this up, and while it is clearly laid out in the climax, it still doesn’t feel earned.

Elements of the film also seem very on-the-nose for the year 2020. A politically divided nation, a plague sweeping the known world, and strangely enough, the first character seen wears a face covering. This all just seems too close to home, or ‘too soon’ for a film releasing in 2021, in the waning months of a global pandemic. Any other year, and this would be a pretty good film, but as of now it’s wrong-place-wrong-time.

(This too would have been a good television show or limited series).

Raya (Kelly Marie Tran) is a character seemingly from another movie. Raya deals in sarcasm, lame jokes, and having few scenes of sentiment. I feel like the younger version of her is the better character compared to the jaded young adult we follow for most of the film. She does grow more fun as the film goes on, but near the end… There is a fascinating portion of the film where she has nothing to lose and all that’s left is vengeance. It’s interesting to see a Disney protagonist like this, especially in an apocalypse scenario.

Sisu (Awkwafina) is a polarizing character. She starts off as annoying with several strangely modern lines, but that smooths itself over time. While she isn’t a direct copy of Aladdin’s Genie, I can see where she takes some inspiration from him (magical character, celebrity voice, blue). I also appreciate that while she has some magic powers, she isn’t invulnerable, and most of the time, needs saving.

Namaari (Gemma Chan) is a pretty weak antagonist, character-wise. She is like the anti-Raya with great combat skills but that’s about it. I’m not sure I really understand her character’s path. She could have been given more scenes, or at least, more dialogue with the others to flesh out her character more.

Boun (Izaac Wang) is another comedic relief. His earnestness never fails, and his flowing salesman-like dialogue is fun. He also works in the more quiet moments, giving some quiet delivery to his more somber lines. I could see him getting a spinoff series of shorts.

Noi (Thalia Tran) at first seems like a rip-off of The Boss Baby, but actually is kind of fun. She is one-note in that her trio of Ongi monkeys provide distraction and can infiltrate buildings, but that’s about it. I warmed up to her as well.

Tong (Benedict Wong) is a pretty good character. He at first seems like a villain (some of his best lines are at this point), but turns out to be a pretty good guy. He is the strong guy of the team, even though he really doesn’t do all that much after he enters the story. I also appreciate how he and Noi form a bond, it’s pretty sweet.

Tuk Tuk (Alan Tudyk) is the noble steed. He’s adorable and made for merchandise fodder, serving the purpose of most other non-talking mounts from Disney.

Other notable characters include Benja (Daniel Dae Kim), Raya’s father (who serves as the lead character’s motivation and eternal believer of trust), Virana (Sandra Oh), Namaari’s mother (who would be a better antagonist with more screentime and motive), and Dang Hu (Lucille Soong), the Talon Chieftess, who tangles up the trust moral even more, and confuses the lesson of the film somewhat.

The dialogue here is an odd mix of modern and old-world. Some usually-solid lines are peppered with anachronisms from the late 2010’s. Some of the jokes go on just too long, and other jokes seem thrown in so the audience doesn’t lose interest. The script also betrays the later plot at points, clearly laying out what will happen (and in what order) around five minutes in. At points, there needs to be more dialogue between characters, as fighting supersedes discussion here. Some line reads also need a second pass, particularly those at moments of high emotion. There is a scene early on where Raya cries while speaking to someone, and that small speech is actually really good.

Once again, most effects are amazing here. This time around there are some 2-D effects, similar to puppetry, at the beginning, and an expansion of the flying water droplets seen in Frozen II. The tear effects, strangely enough, are of note hear, with realistic smears on skin. The character animation in most scenes is fluid and stylized, especially the chase scenes, where the camera-work is fantastic. The environments look interesting, with great lighting effects and color.

However… The fight scenes early on have slow pacing with floaty camera work and feel incomplete. Some scenes just end randomly and fade to another. A couple particular character animations feel pose-to-pose and robotic. The mouths don’t sync up with the dialogue at times. It’s understandable given that most of the film was made in 2020, but it could have been given more polish considering the release date was pushed forward.

The music here is pretty good! James Newton Howard brings an ethereal orchestral score that at some points reminds me of The Lion King, while taking Asiatic influences for other tracks. There are a lot of moments that let the music breathe and I really appreciate the time taken to show the score off. The music fits the scenes very well, evoking chase scenes, slower points, and even magical otherworldly moments with every note.

Even though this isn’t really a song, the few short lines Raya sings before she meets Sisu is still very good. It’s the best display of emotion by the lead character in the film. Interestingly enough, it does not reflect the film’s South East Asian influence, instead coming from the Gujarati language of India.

I have no clue what these lyrics mean (still after researching them) but they’re spoken powerfully.

“Lead the Way” (Jhené Aiko) -Made specifically for the film, this song still hammers in the theme of ‘trust’, but here it seems like it makes more sense. If it were worked into the film, maybe the lesson would fit better. Otherwise, it’s kind of bland and similar to every other pop song out there, instrumentally.

After a year of no Disney movies, I had high hopes for this film, especially in today’s political climate. With all of the current “Asian hate” going on, and the amount of neighborly distrust recently, it felt like the perfect time for this film. After viewing this twice, I find that this film really wasn’t made for the average viewer. Similar to Sam’s speech in the  final minutes of Falcon and the Winter Soldier, this film is more addressed to those higher-up, like governments and local officials. It is a film about trusting those around you, regardless of where you come from.

The main issue is that the film never directly deals with those higher ups, at least on-screen. Namaari or Raya never really confronts Vinari, or we never see a meeting between the leaders of what was Kumandra. It may have been a bit boring or bloating the film, but it would have cleared up a lot story-wise.

Speaking of story, it’s confusing at points, but that really comes down to the characters, who are all fighting for screen-time. The story falters because of the characters, who are making the story weaker in turn. I hoped the characters would talk more to try and resolve this without violence, but when you have two basically similar characters fighting each other, it’s like hitting a brick wall. The side characters are fun / interesting enough, but they only serve to hold up the thin plot.

The dialogue has one foot in the present and the other in the past, slowly mixing the two more efficiently as the film goes along. The animation is breathtaking in most scenes, but choppy in others with some glaring character animation flaws. The score is great with different influences from Asia to classic orchestra. Raya’s  short chant to Sisu, while not really a song, is way better than the credits pop song.

On one hand, it’s great to finally finish out the Disney Animated Canon. On the other, this is quite the sour note to leave it on. I know there will be other, better films eventually, but for now, I’m at least grateful to watch this. While Raya and the Last Dragon is not the best Disney Animated Canon film, it certainly is not the worst.

I put my trust in Disney for this film, and it let me down (not as bad as Namaari though).

My OVERALL RATING for Disney’s Raya and the Last Dragon is 66%.