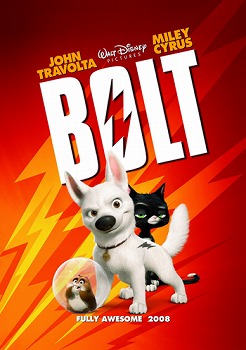 The plot of Bolt is yet another Disney ‘journey’ movie, but also a ‘separation’ story and a ‘finding your true purpose’ story as well.

We’ve seen these all before.

The film tries to juggle these points, but as characters and motivations are introduced, plot points fall by the wayside in favor of the next new thing. Sure, Bolt’s goal is Hollywood and Penny’s goal is getting Bolt Back, but all the other plot points in between mean nothing, basically. The plot wants to place emphasis on the characters, but the events happening are too frequent to focus on for too long. To be short about it, the film has a short attention span.

As for the good about this film’s plot, all parts surrounding the actual TV Series and Hollywood is great. The opening and finale are awesome, but the middle simply lacks that greatness. It does have some emotional points, but mostly all you need is the beginning and the end of the film. Superfluous characters aside, all you really need is Bolt and Penny.

Bolt (John Travolta) is an interesting Disney Protagonist. Similar to The Truman Show, Bolt is living a fake reality and has to get out of it. It’s an inspired take, but it falls apart once he gets to New York. Try and fail as he may, he does not have any super powers. Throughout the movie, he learns how to be a real dog, but shouldn’t he have some sort of instincts or drive to be a real dog? His character, even though this is a work of fiction, seems false somehow. Travolta does a good job with what he is given, though his delivery is somewhat flat.

Mittens (Susie Essman) is a nuanced, yet familiar co-star. She’s savvy, funny, and sarcastic, and brings a lot to the table. Her backstory is based on abandonment issues, and that brings a softer side to her, and she brings a more rational side to the main trio as well. Originally thought to be an antagonist by the main characters just because she is a feline, Mittens’ actions near the beginning are humorously interpreted as malicious, but later, she earns trust and trains Bolt on how to be a real dog. Throughout the film she constantly searches for a place to call home, and safe to say, she gets one in the end.

Rhino (Mark Walton) is the comic relief of the trio. I personally waffle between liking and disliking him. He has unbridled enthusiasm for all things Bolt yet he is the cause of a lot of the plot’s setbacks and problems. The strangest thought I had was ‘how does a hamster in a ball affect the plot this much?’ and the answer is ‘surprisingly a lot’ leading to a lot of insane moments that make me question the reality of what is going on in the film. His character himself leaves something to be desired, and while he is a good character on paper, he’s really annoying in reality.

Penny (Chloë Grace Moretz, Miley Cyrus) is a pretty good character here. We see the pitfalls of Hollywood in most scenes she’s in, and she’s in peril both fictionally and in real life. It’s somewhat new ground to tread, and kind of biting the hand that feeds, yet it’s the most compelling story in the whole film. Penny is basically an ordinary teenager with star power yet she doesn’t flaunt it. She also still wants a sense of normalcy when the cameras are off, endearing her to the audience. Her story gives a sense of realism to the film that is sorely needed, and I wish there was more of it, and the climax of the film is a great callback to the beginning, coming full circle.

Other notable characters here are the Director (the late James Lipton of Inside the Actors Studio who I initially thought was James Woods) who actually looks like James Woods (kind of), Penny’s mother (Grey DeLisle, important here for being an actual Voice Actor by profession) who cares for her daughter enough to throw a mean punch, and three Pigeons (Lino DiSalvo – Vinnie, Todd Cummings – Joey, Tim Mertens – Bobby) who exemplify meeting anyone near Hollywood.

The dialogue here works. It isn’t truly anything super dramatic or comedic, but it gets the job done. The actors do their jobs fairly well, no one is really miscast, and I am pleasantly surprised at the talent used here. It’s modern, self-aware, and clever.

The CGI is continually getting better. Landscapes are beautiful here. Farmland, Cities, Studios, and Snowy Hills are all beautifully rendered and probably reskinned and reused for other films, but it’s gorgeous here. It’s not perfect though, as the shadows and some character textures lack polish. If this were made today, I’m sure it would look much better.

The score here (composed by John Powell) is actually really great, running the gamut from soft piano to high-intense orchestra and synth beats, as well as allusions to other films within those songs. Character themes and certain instruments for them are used very well here, and are great to listen to in or out of the film. It’s more cinematic and grand than what we’ve seen before. Surprisingly, even though I’m not a huge fan of country, I like the lyrical music used here.

I Thought I Lost You (Miley Cyrus and John Travolta) – A good-old-fashioned country rock song, showing that Travolta can still sing, and Miley Cyrus is great as always.

Barking at the Moon (Jenny Lewis) – More traditional country, but used well in the film for a travel montage. Jenny Lewis sings it well, and the instrumentation is nice.

Bolt, while not the best film in the canon, is competent. It presents well visually, aurally, and dialogue-wise, yet lacks character and plot depth, retreading plots that have come before and relying on stereotypes and flat character-work. I can see what the film was going for here, but it lacks a unifying theme to tie it all together. This seems the result of trying too many ideas out in a single film, and while I do feel like the Hollywood portions of Bolt were great, the rest was lacking. When you show the audience intense action and then cut to normalcy, some of the audience deep down, still wants that action, regardless of how good that film is. I appreciate the middle of the film, but the best parts are the beginning and the end.

If Bolt was an action spy television series like in the first ten minutes, consider me watching it and loving it. 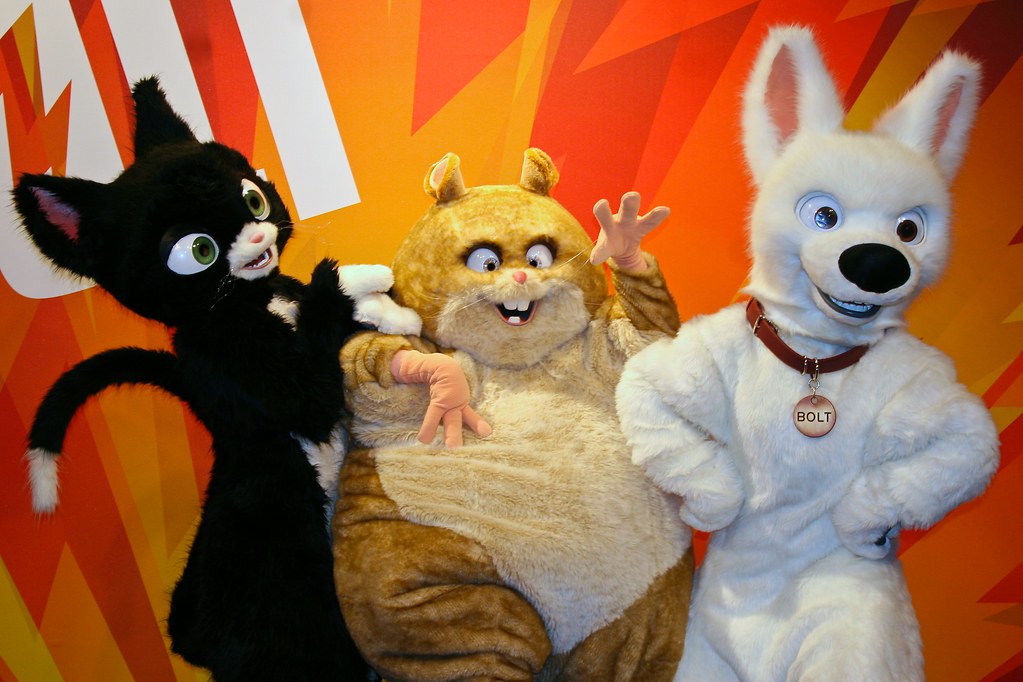 My OVERALL RATING of Disney’s Bolt is 78%.

With a film more relevant than it was a 12 years ago….